We are a Disciples of Christ church serving Athens, GA since 1876.

Here for the long haul...

Established in 1876 and in the same building since 1915, we're committed to serving the community of Athens and reaching them with the hope of Jesus.

Our marquee states it proudly: All are welcome here.

We aim to glorify Jesus Christ by being a community where people are united in love, spiritually passionate, challenged intellectually, and committed through service to the common task of building the Kingdom of God.

We live this out by loving God with our full selves, loving others through our outreach and care, and loving ourselves by asking questions and learning. We are a church that strives to focus outwardly and share our faith with others while learning and growing in faith together.

We are part of the Christian Church (Disciples of Christ), a movement for wholeness in a fragmented world. We want to bring all of God's children together to make the world a better place. We value thinking over blind beliefs, disagreeing agreeably, and sharing the communion table with ALL of God's creation.

We like the tough questions. Thinking critically is part of our call as Christ's followers. We value learning from one another, challenging ourselves and our community, respecting a diversity of interpretation, and developing a deep faith.

The Disciples of Christ denomination began on the American frontier in the 1800s. Since then, we have proclaimed a Gospel of love and openness.

Inclusion at the Lord’s Table

Through communion we are connected to one another and to God through Jesus Christ. Everyone is welcome to participate in the celebration of communion every week at the heart of our worship.

We practice baptism by immersion for those making an initial profession of faith as a personal commitment to God. Recognizing that traditions of the church universal are many and varied, we affirm and welcome members from any faith background and recognize all forms of baptism.

The importance of Scripture

We believe that the Bible is the inspired word of God, but recognize and appreciate both the human and divine influence. We value group study, conversation, and diverse positions within the community of faith. We seek a better understanding through study and prayer while celebrating diversity as a strength.

The local congregation has authority over the life and ministries of the church, but is connected, by covenant, through the sharing and receiving of resources within the broader mission and vision of our denomination, Christian Church (Disciples of Christ).

Laypersons are encouraged to participate in both worship leadership, including serving at the Lord’s Table, and as ministry partners with ordained or licensed pastoral leaders in all the ministries of church life.

We see the unity of the church universal as a foundational Christian principle. One of our denomination’s founders, Thomas Campbell, stated, “The church of Christ upon earth is essentially, intentionally, and constitutionally one.” We also believe that one of the greatest needs in our world today is interfaith dialogue, relationship, and respect for difference.

Other questions about our beliefs and practices?

It takes a long time to be old friends. Which is exactly how we feel about Athens.
1876
First Christian was organized by a small group who met for worship in the auditorium above the market at Town Hall in Athens, GA. 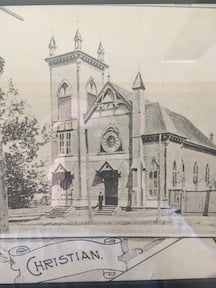 1884
The original church building was on the corner of Dougherty and Pulaski across the street (current site of Athens Blueprint) from the current building. The building cost, including land, was $4,200. Following the construction of the current building in 1915, the church building was sold and was moved across the street where it served as a boarding house and later housed Bridges Funeral Home. The building was demolished in 1971 for the construction of the Denney Towers Housing complex.
1909
Rev. Stanley R. Grubb began his first tenure as minister. Fundraising began for a new, larger church building. 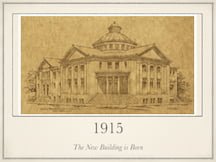 Grandison M. Caskey served as contractor for the construction of the Akron Plan facility. The building was dedicated on Sunday, December 19, 1915, with a building cost of $46,000.
1926
G. M. Caskey completed construction of a parsonage just east of the church building. This building served as a residence for several pastors and housed the church office and Sunday School classes prior to demolition in 1973 to address off-street parking needs for the church.
1948
The church hosted several denominational state conventions and in 1948, Rev. Paul C. Howle, minister 1942-1957, helped establish The Christian College of Georgia. Our association with college-age students in the Athens area continues today as Disciples on Campus. 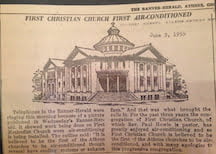 1952
First Christian was the first church in Athens to have an air-conditioned sanctuary at a cost of $6,500.
1962
First Christian supported the founding of Friendship Christian Church by commissioning 63 members from First Christian who were entrusted with the responsibility of founding and sustaining the new church. First Christian provided spiritual and financial support and a place for worship until the new worship facility was built on Tallassee Road in Athens.
1967
Across the street neighbor, St. Joseph’s Catholic Church, held mass and meetings at First Christian Church for several months during a roof structure repair in their building. The two congregations met together for an Ecumenical Mass including communion to celebrate the brotherhood of God’s people.
1971
The stained glass windows in the sanctuary were installed to replace the original windows which were damaged during a massive explosion and fire at a gasoline storage facility on Hull Street. The original glass was repurposed for doors to the baptistery in the sanctuary of the church. 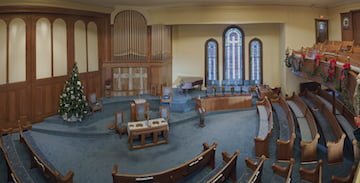 1975
Building renovations and repairs which included the purchase of a new console for the organ, sanctuary pulpit design, update to the air-conditioning system, reconfiguration of space to create a church office and choir room, redesign of the Grande Parlor to include a library, and renovations to main floor restrooms were completed.
1986
The church purchased the Grubb House (490 Pulaski Street) which was built in 1913 by G.M Caskey and home to Rev. Stanley Grubb and his wife, Mabel, who lived there until her death at the age of 98. The Grubb House provided outreach ministry space to the Athens Area Attention Home and the Northeast District Red Cross. Current use includes Arrow Preschool, Church World Service, Al-Anon, A A, and Disciples on Campus.
1992
The Schantz Organ Company designed, built, and installed a new pipe organ at a cost of $91,000 to replace the original organ installed in 1915. 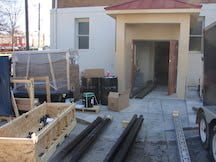 2012
Following a successful Second Century Campaign, the century-old building moved forward with building modifications focused on accessibility with installations of an elevator, interior ramp, and accessible restroom facilities. Other renovations including a redesign of the Grande Parlor and library space, accessible entry from the parking lot, restoring the original heart of pine flooring in the sanctuary, and update of heating and air systems to replace the radiator steam heating.

2015
The 100thbirthday of the building was recognized with a Building Centennial Celebration in November. The worship service included a rededication of the building and All Saints Sunday recognitions. The community was invited for an open house and a concert in the sanctuary.
2018
The metal roof of the church building and dome, several original windows, and the roof of the Grubb House sustained severe damage in a summer hail storm. Replacements and repairs were completed in 2019. The patina green, heat-welded TPO roofing was installed over the existing metal roof.